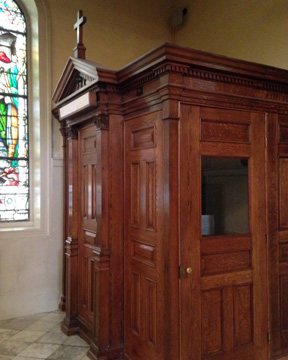 "Those who approach the sacrament of Penance obtain pardon from God's mercy for the offense committed against Him and are, at the same time, reconciled with the Church which they have wounded by their sins and which, by charity, by example, and by prayer labors for their conversion." (CCC, 1422)

The sacrament of Reconciliation or Penance is known by several names:

The Lord Jesus Christ, physician of our souls and bodies, who forgave the sins of the paralytic and restored him to bodily health, has willed that his Church continue, in the power of the holy Spirit, his work of healing and salvation, even among her own members. This is the purpose of the two sacraments of healing: the sacrament of Penance and the sacrament of Anointing of the Sick. (CCC, 1421).

Despite the feelings of many Catholics who consider the sacrament of Reconciliation either unnecessary or frightening, that fact remains that few things could be more necessary for our salvation than this humbling sacrament. Many people have avoided celebrating the sacrament, sometimes for years at a time, because they "don't know what to do." The following brief explanation is intended for a person who has not been to confession in some time. The person who is going to confession is called a "penitent" because he or she wishes to do penance and to turn away from sin.

Preparation
Before going to confession, the penitent compares his or her life with the Ten Commandments, the Beatitudes, and the example of Christ and then prays to God for forgiveness.

If the penitent is unknown to the priest, it is proper for the penitent to indicate his or her state of life, the time of the last confession, difficulties in leading the Christian life, and anything else that may help the confessor in exercising his ministry.

Confession of Sins and the Act of Penance
The penitent then confesses his or her sins. If necessary, the priest should help the penitent to make a complete confession and to have sincere sorrow for sins against God. The sorrow a penitent feels for his or her sins is known as contrition and must include an intent to sin no more and to avoid all future occasions of sin. Through confession of sins, the penitent looks squarely at the sins he is guilty of, takes responsibility for them, and thereby opens himself to His grace and to the communion of the Church in order to make a new future possible.

The priest then offers suitable advice to help the penitent begin a new life and, when appropriate, leads him or her to resolve to make appropriate restitution for the harm he or she has caused others. The priest imposes an act of penance or satisfaction on the penitent. The penance corresponds to the seriousness and nature of the sins and may suitably take the form of prayer, self-denial, and especially service to one's neighbor and works of mercy. Such a "penance" serves not only to make up for the past but also to help the penitent to begin a new life filled with grace.

O my God,
I am heartily sorry for having offended you,

and I detest all my sins,

because of your just punishment,

but most of all because they offend you, my God,

who are all good and deserving of all my love.

I firmly resolve, with the help of your grace,

to sin no more,

and to avoid the near occasion of sin.

God, the Father of mercies,
through the death and resurrection of his Son
has reconciled the world to himself
and sent the Holy Spirit among us
for the forgiveness of sins;
through the ministry of the Church
may God give you pardon and peace,
and I absolve you from your sins
in the name of the Father, and of the Son,
and of the Holy Spirit.

Dismissal of the Penitent
Then the priest tells the penitent to go in peace. The penitent continues his or her conversion and expresses it by a life renewed according to the Gospel and more and more steeped in the love of God.