The St. Louis Cathedral is one of New Orleans' most notable landmarks. This venerable building, its triple steeples towering above its historic neighbors, the Cabildo and the Presbytere - looks down benignly on the green of the Square and General Andrew Jackson on his bronze horse and on the block-long Pontalba Buildings with their lacy ironwork galleries. Truly, this is the heart of old New Orleans. 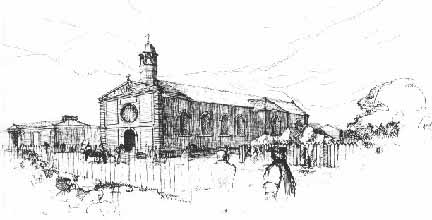 Since 1727 New Orleanians have worshipped in churches on this site. Half a dozen years earlier, the French engineer, Adrien De Pauger, who arrived in the newly founded city on March 29, 1721, designated this site for a church in conformity with the plan of the Engineer-in-Chief of Louisiana, LeBlond de la Tour, who was at the capital, Biloxi.

The new parish church, dedicated to Louis IX, sainted King of France, was thus perhaps the first building in New Orleans of "brick between posts" (briques entre poteaux) construction, an effective method of building that continued to be used in Louisiana until at least the middle of the nineteenth century. De Pauger, unfortunately, died on June 21, 1726, before his church was completed. In his will he requested that he be buried within the unfinished building, a request presumably granted.

During the six decades that the church stood, there worshipped within its walls French Governors Perier, Bienville, Vaudreuil and Kerlerec and Spanish Governors Unzaga, Galvez and Miro. In this first little church were baptized the children of the colonists and the children of the slaves. Here were married the lowly and the highborn, and through its doors were borne the mortal remains of the faithful for the burial rites of Holy Mother Church on the last journey to the little cemetery on St. Peter Street.

The following are the names of persons buried under the church, before it was built and since.

The Year of Calamity

A fire on March 21, 1788, started when a candle ignited the lace draperies of an altar in the home of the military treasurer of the colony, Vincente Jose Nunez, on Chartres Street. Among the buildings burned to the ground were the Church of St. Louis, the priests' residence, and the Casa Principal, which housed the Cabildo.

In a letter written on March 28, 1788, Father Antonio de Sedella (Pere Antoine), who was pastor of the church, described the rapidity with which the fire made headway. He wrote that he had sent some of the church records to the home of the tobacco director, "distant from the Presbytere about two rifle shots," but they were lost when that house caught fire.

Nearly a year elapsed before the charred remains of the church were cleared away and construction of a new church began in early 1789. More than five years were to pass before the new church was completed in December, 1794.

The second Church of St. Louis was the gift of the wealthy Don Andres Almonester y Roxas, a native of Andalusia who had acquired numerous properties since his arrival in New Orleans in the wake of Governor Alejandro O'Reilly.

As Louisiana and the Floridas had been created a diocese in 1793, and Luis Pefialver y Cardenas appointed first bishop with New Orleans as his See city, the new church was dedicated as a Cathedral and put into service on Christmas Eve, 1794.

Shortly before the completion of the Cathedral, on April 25, 1793, the diocese of Louisiana and the Floridas was created by Pope Pius VI. Don Luis Ignacio Maria de Pefialver y Cardenas of Havana was appointed the first bishop.

He arrived in state in New Orleans in July, 1795 to take formal possession of his See and begin his episcopal duties.

In 1819 a New Orleans clockmaker, Jean Delachaux, was authorized by the trustees to obtain a suitable clock to be placed in the facade of the Cathedral.

As this was a project of general civic interest, the City Council agreed to the expense of buying the clock and its bell and also to share in the cost of erecting a central tower to house them. Delachaux brought the clock and bell with him from Paris and Latrobe records in his journal an incident which occurred when he was about to place the clock's bell in the tower:

When the new bell was ready to be put into the tower, I wrote him (Pere Antoine) a letter in Latin to apprise him of the circumstance, in order that, if the rites of the Church required any notice of it, he might avail himself of the occasion and do what he thought necessary. He thanked me, and I had the bell brought within the Church. After High Mass, he arranged a procession to the bell and regularly baptized her by the name of Victoire, the name embossed upon her by the founder.

This bell, which still rings out the hours from above the church's clock, is inscribed in French: Braves Louisianais, cette cloche dont le nom est Victoire a été fondue en mémoire de la glorieuse journée du 8 Janvier 1815. [Brave people of Louisiana, this clock, whose name is Victory, was cast in memory of the glorious 8th of January, 1815]

Surmounting both inscriptions are American eagles and at the bottom of the bell an inscription reads: Fondue a Paris pour M. Jn. Delachaux de Nouvelle Orleans. [Cast in Paris for Mr. John Delachaux of New Orleans.]

The central tower, which added grace and dignity to the Cathedral, was one of Latrobe's last projects, for he died in New Orleans of yellow fever on September 3,1820, before it was completed.

In 1829 an organ was imported and in 1825 Francisco Zapari, an Italian painter, was employed at a fee of $1,855 to decorate the interior of the church and its three altars.

On January 22, 1829, the well-beloved Pere Antoine was laid to rest in the church after a funeral service which was one of the largest ever seen in the city. For more than 40 years, this remarkable Capuchin priest had labored in New Orleans; he had been pastor of the Cathedral from 1785 to 1790 and again from 1795 to the time of his death at the age of 81. For three days after his passing, the body of Pere Antoine was laid out in the Cathedral rectory and thousands came to pay homage. On the day of the funeral, the firing of a cannon announced the beginning of the ceremonies. The coffin was carried on the shoulders of four young men who were surrounded by eight honorary pallbearers, all friends of the deceased.

On January 8, 1840, Andrew Jackson returned to the scene of his triumph against the British twenty-five years earlier. He went to the St. Louis Cathedral where an oration was given in his honor. After this ceremony, he conducted a military review in the Place d'Armes.

After a week of continual entertainment, Jackson returned to the Place d'Armes on January 14 to lay the cornerstone of the monument which the square today. There was the usual parade and a large crowd to watch the proceedings.
Bishop Antoine Blanc, in full pontifical, received the General.

Another joyful occasion in which the Cathedral played a part was the visit in December, 1847, of a hero of the Mexican War, Zachary Taylor, whose victory at Monterey would send him to the White House. After the service, the crowds cheered with joy as the old General rode his battle horse, Old Whitey, through the city to the St. Charles Hotel. 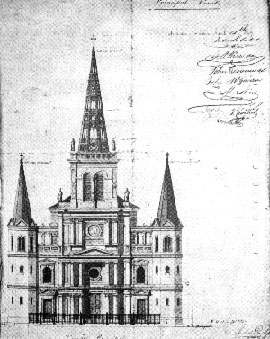 De Poulily's drawing of the facade of the new St. Louis Cathedral. This elevation was designed In July 1847 and became part of the contract with the trustees, March 1849. Design was later slightly modified. (N.O. Notarial Archives)

In 1844, the Baroness Pontalba, through her New Orleans agents, presented to the Council for the First Municipality a project to construct a two-story arcaded facade in front of the old buildings bordering both sides of the Place d'Armes, buildings she had inherited from her father, Don Andres Almonester. Two years later, this remarkable woman again submitted and had approved by the Council elaborate plans, prepared under her personal supervision, which called for remodeling her buildings with arcades similar to those of the Cabildo and Presbytere, and also for extensive improvements to the square itself, to create a bit of Paris for her native city.

These additions so increased the size of the two flanking buildings that something had to be done to the Cathedral to bring it to proper scale. Besides, the church was old, its walls were cracking, and it was too small for the congregation of the growing city.

As far back as 1834 the trustees had consulted with J. N. B. de Pouilly, the French architect. De Pouilly had suggested lengthening the church and adding galleries but he was not very optimistic that even these changes would enlarge the church sufficiently to fit the needs of the growing congregation.

A contract was made on March 12,1849, with an Irish builder, John Patrick Kirwan, "for the restoration of the Cathedral of St. Louis." De Pouilly's original specifications, which became part of the contract, called for a reconstruction that left intact only the lateral walls and the lower part of the front and the flanking hexagonal towers of the old church. But as construction proceeded, it became evident that the side walls, too, would have to be demolished.

During construction, the central clock and bell tower collapsed. This calamitous incident caused damage estimated as high as $20,000. In the months that followed, inspections by experts sought to determine the cause of the collapse, and proposals and counter-proposals between trustees and builder culminated in the trustees ordering Kirwan to quit the job. De Pouilly, the architect, was also dismissed and the trustees employed another architect.